The first Cyril Scott plaque was unveiled by Vasily Petrenko, Chief Conductor of the (RLPO) Royal Liverpool Philharmonic Orchestra at a small ceremony at the Laurels on the corner of Kylemore and Village Rd on June 15, 2019 . Also in attendance was the Deputy Mayor of Wirral, Cllr George Davies. Cyril Meir Scott (27 September 1879 – 31 December 1970) was a composer, poet and writer. He spent his childhood in Oxton, living in this house. His style of music was essentially late romantic. Sir Eugene Goosens, referred to Scott as the “Father of British Music”.

The second Cyril Scott Plaque was unveiled on the next day by the Georgian pianist, Nino Gvetadze- who is currently making recordings of the composer’s work for Challenge Records – who  gave a wonderful talk about the music of Cyril Scott. You can see a film about the release of the recording and her visit to Merseyside – click here.  plaque is on the the house in Rich View where the composer was born in on September 27th 1897. A relative of the composer had driven to Oxton from her home in Surrey.  Nino had flown in from Amsterdam especially to have the opportunity to unveil the plaque and to to learn a little more of the composer and the special place where he had lived and worked for much of his life – she was accompanied by Valentin Laout from Challenge Records International based in Amsterdam. 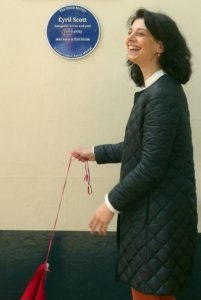 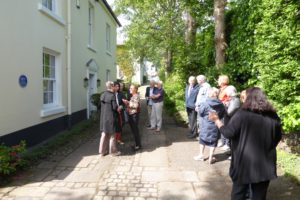